September and October were torrid months for global markets. From a high on 28 August, the MSCI AC World in GBP was down by over 9% by 24 October. The FTSE 100, which had been falling for longer, was down over 10% in October from highs reached in May, even with dividends included. And what’s worse, this was the second selloff this year.

Both indices had fallen by a similar magnitude over the first quarter of 2018.

Market falls are unsettling for investors, leading to questions like, “what if this time is different, what if markets never recover? Should I be doing something different?” It’s tempting to be lured into safe haven assets like cash, but that would be a mistake.

The naked truth about risk 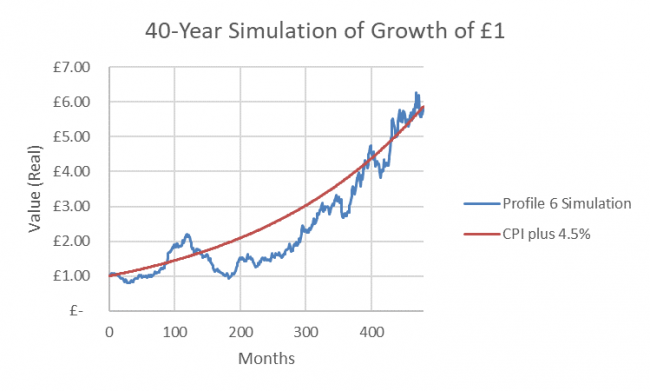 Because of compounding, this chart tends to obscure risk in early periods and exaggerate it later on. Below, I have used a log or exponential scale on the y-axis to more intuitively represent returns over long periods, which is why the CPI +4.5% line is now straight and not curved with compounding. Values are “real” and exclude inflation. 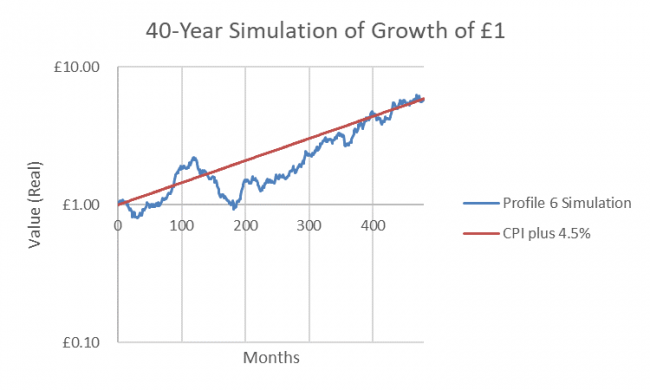 This would be a very satisfactory outcome for an investor in this portfolio who saved from the age of 25 to 65. But this investor would have had to endure a few bumps along the way.

Given the turmoil experienced in markets in October, we used the simulator to see how “normal” such falls are for a portfolio with the same asset allocation as the UK PortfolioMetrix profile 6 portfolio. The chart below shows how many times in 40-year investment periods monthly losses exceed 2.5%, 5%, 7.5% and 10% respectively. This is derived from running 500 simulations and taking the average:

This means that on average over 20 occasions in a 40-year investment period there were monthly losses that exceeded 5% i.e. once every two years. In other words, these negative periods should be anticipated; they are quite simply consistent with an investment with even this reasonably modest risk profile. The knowledge doesn’t necessarily make losing money any more comfortable, but it does provide perspective. When looking at an historic chart, it’s easier to contemplate those big dips because you can see the recovery – living through them takes more grit!

If all these anticipated negative months seem like too much of a threat to one’s sleep and there is a concern that composure may evaporate (the biggest risk to wealth accumulation by far), let’s see the impact of down-risking to a Profile 4. The expected return for Profile 4 in the simulations is CPI + 3.3% with a risk of 8.4% (again, the expected risk based on this asset allocation held passively – historically lower in real life within our actively managed portfolios). The numbers improve markedly: 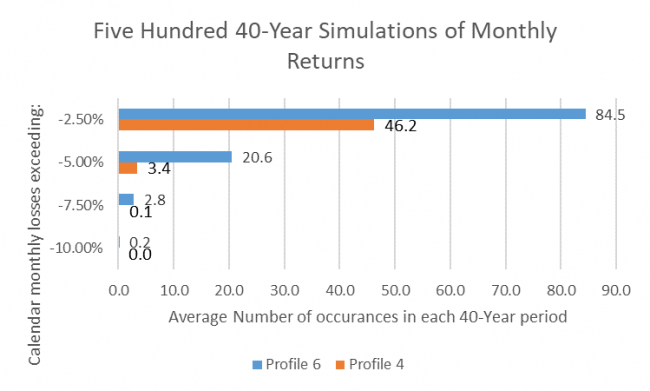 Instead of almost 21 instances of monthly returns below -5% in each 40-year period, there are now only just over 3 on average in 40 years.

But if one is likely to sleep better in a profile 4, at what cost? Here are the returns of the two simulations compared:

However, to make it easier to comprehend visually, I used a log or exponential scale on the Y-axis. Let’s see what happens when I remove that scale:

Risk is not just about volatility but needs to include the risk of not accumulating enough assets. This shortfall risk is the elephant in the room and is too often ignored as investors focus on shorter-term fluctuations. Return in itself is a buffer against risk. I am not advocating against lower-risk portfolios as they play an important role in matching portfolios to investor objectives (such as meeting a required return at the lowest possible risk). I am simply emphasising the long-term expected cost of smoothing out returns too much.

Finally, market timing is a mugs game. Sure, we have successfully applied modest tactical tilts to asset classes at the margin when the horizon looks seriously wonky. Usually, this is because we see a skew towards the downside that doesn’t fit the “equilibrium model”. But the truth is that there is a mountain of academic and empirical evidence that suggests that market timing is really, really hard and the outcomes tend to be somewhat random.

The corollary is that those who believe that they have the only crystal ball in town (and who make big, dramatic risk-on, risk-off trades) tend to make a horrible hash of running portfolios (eventually). If it were as simple as moving into cash when markets were expected to fall and going back in when they were expected to bounce, you’d have a money printing machine – in fact, you wouldn’t share your secret and manage other peoples’ money, you’d keep it to yourself, mortgage your grandmother and invest selfishly on your own behalf. Selling out after taking the losses and buying back in after markets recover is a wealth destruction strategy that has no equal.