Concerns about the Wisdom of the Collective*

The last couple of years haven’t been a great ad for democracy.  The Brexit and Trump phenomenon is not just crazy stuff that you can shrug off.  Although these are different events with somewhat overlapping aetiologies, they go straight to the heart of our identity in liberal democracies and raise lots of questions.  The fact that we know WHY these events happened and can build an historic narrative to explain them provides little solace.

Long before the political shocks of 2016, we were lamenting the lurch towards nationalism, inward looking policies, intolerant rhetoric and identity politics, just as we feared the backlash of rising inequality.  Sure, you have loonies to the left and right, but if you can’t trust the collective to make even vaguely informed decisions, who can you trust?  This got me thinking about the real underpin of the democratic process – that which needs to be axiomatic for the rest of the edifice to stand.  The assumption is that collective wisdom, in fact, exists.

This is not about democracy as a constraint on absolute power and the ability to hold those in power to account, but that the electorate which does so has even the foggiest understanding of the issues and that their views are based on information that is by and large true.

In the absence of that wisdom, what faith do we have in those who wield ultimate power (us as a collective)?  We don’t really know if democracy works in the long-run because the modern version is just all too new, and all the previous historic examples eventually gave way to tyranny.  I am pretty sure though that collective wisdom works in the long-term, just as creative destruction underpins capitalism. Failed choices and their painful consequences leave voters chastened and wiser.  Evolution doesn’t require intelligent design to work; blundering from one failed experiment to another leads to whole load of dead ends but ultimately results in progress. But does it have to be so cathartic and indiscriminate?  Why not just make better decisions when the data to make those decisions is so unambiguous? Given the sheer magnitude and weight of responsibility borne by voters (unbeknown, it seems, to them) can we trust the “wisdom” bit?

I was thus curious about the distinction between collective intelligence and collective wisdom.  The former, as it happens, has more to do with a decision-making process that involves collaboration and consensus.  The latter relates to shared knowledge and co-intelligence.

Making decisions with Brexit-level consequences carry a little more gravity than changing a government every five years, which, using my evolutionary analogy, means a chance to evolve with every election cycle.  Brexit, on the other hand, will have trans-generational impact (assuming it happens).  Problematically, the young people who mostly voted against Brexit will have little chance to reverse the decision in decades to come as they live with the consequences.  Their Brexit-leaning elders who, having caused the mayhem, will now reliably die off.  As they mature into the new leadership class, the youth will be saddled with, in my opinion, an albatross they never asked for. The issue is not pro-Brexit adherents with well-constructed views founded on real information – differences of opinion is what democracy is all about.  The failure is that a question was asked of an electorate who, en masse, could not have more than a rudimentary grasp of the complex issues and consequences – too much was asked of them and the prospect of manipulation through misinformation was reasonably foreseeable.  The Brexit process was thus a failed experiment in democracy regardless of whether you are pro or anti.

What lessons then? Firstly, we need to recognise the limits of direct democracy in general. That is, the issues that voters can decide on collectively through any form of plebiscite.  In every democracy, the electorate delegates power and authority to its officials to make choices on their behalf.  Not only would it be theoretically impossible for voters to engage with the plethora of decisions that need to be made, they are simply not always qualified to do so.  Running a central bank, a public health care system, the nation’s security apparatus, the public transport system and public utilities require expertise and the ability to make complex trade-offs.  Power is delegated by voters who are aligned with the broader policies and values of a party.  The leadership of that party then needs to apply judgement in executing their mandate, going “on-risk” as they do so – they will be judged at the polls. For what is leadership without a mandate to lead?  The great danger is when that responsibility is shirked, and leaders abrogate decisions they wish to avoid making themselves.

Secondly, democracy needs to evolve just as society evolves, even if there are underlying principles and enshrined values that are inviolable.  It’s not just change that should fuel the evolutionary engine, but also learning and a feedback loop mechanism.  Even though constitutions and parliamentary practice may appear to have stood the test of time, none of them have withstood every possible crisis because history is a subset of a great number of possible histories.  As circumstances reveal the cracks, the cracks need to be filled as part of a living process.  The US as the world’s oldest constitutional democracy is in trouble and the bit that pokes you in the eye is the word “Amendment”.  It seems to me Americans have long lost their ability to read into it the ordinary meaning in the word.

The political rationale that led to the Brexit referendum, the process itself and the subsequent naive management of the negotiations have been a disaster.  On the positive side, there are some hard lessons to be learned that will hopefully reanimate democratic evolution.  Donald Trump has done everything in his power to undermine the checks and balances designed to constrain him.  I believe great harm is being inflicted on the US national psyche but, when he is gone, I expect some very rapid bipartisan cooperation to remedy the constitutional flaws he has unwittingly revealed.  There have been few material amendments to the US constitution in recent years – I wouldn’t be surprised if we see a few in the next decade, which would be a good thing.

Constitutions are not religious tomes and parliaments aren’t temples.  Evolutionary “events” are required to stimulate political adaptation and perhaps Brexit and Trump will provide exactly that kind of environmental stress.  Democracy needs an intelligent overhaul and voters need to grow up and understand their responsibilities.  If they don’t, history suggests that evolution need not follow a benign path.

Whilst this is an interesting topic, managing portfolios involves incorporating external data into investment views.  Markets tend to react quite predictably to high frequency political events but also tend to settle fairly quickly.  However, some effects are more enduring and need to be factored in.  One does not have to have directional views on political outcomes; you simply need to understand the impact of uncertainty on asset valuations.  In fact, some events are so unpredictable that taking aggressive portfolio positions is a very inefficient use of one’s risk budget.

Beware the investment manager that says, “We actually called it dead right, but no-one could have predicted…”  That’s where they are wrong; the occurrence of unexpected events is completely predictable and as much time should go into engineering portfolios for impossible-to-predict events as goes into formulating directional views.  The real world is not linear and neither should our thinking be.

*This article was published in the UK by Professional Adviser 30th November 2018.

Performance – a silver lining around a dark cloud and another milestone

As iterated in my recent article, 2018 has been a tough year for investors everywhere.  Absolute returns are what grow and protect wealth; you can’t eat relative performance.  That being said, I remember when we hit our 5-year performance track record, there were mutterings from dark corners carrying dire predictions, mostly along the lines, “that’s all very well, but let’s see what happens when there’s a proper downturn”.  Well, on the 1st of December we hit our 8-year performance milestone in South Africa and we have indeed had just such an opportunity to see what happens when the going gets tough.  What it shows is that it is perfectly feasible to generate alpha and relative outperformance through strategic investing and intelligent diversification.  Doing better than most in downturns doesn’t require a crystal ball and aggressive portfolio positioning.  Whilst the balm may have no more than a soothing effect on battered investors and not cure the malaise, there is some good news to convey (remember, Profile 6 is your correct point of reference for comparisons to a “balanced fund”): 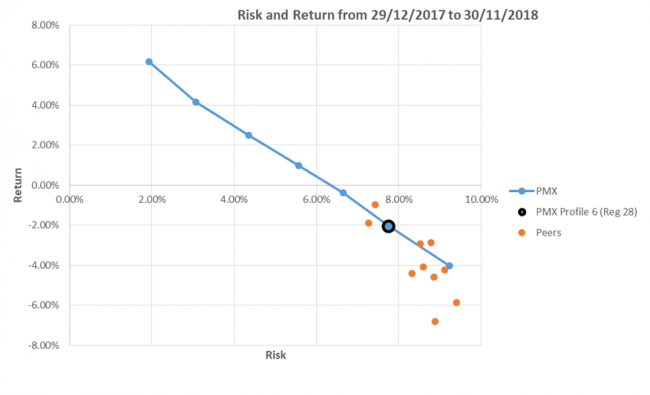 And this particularly wicked period: 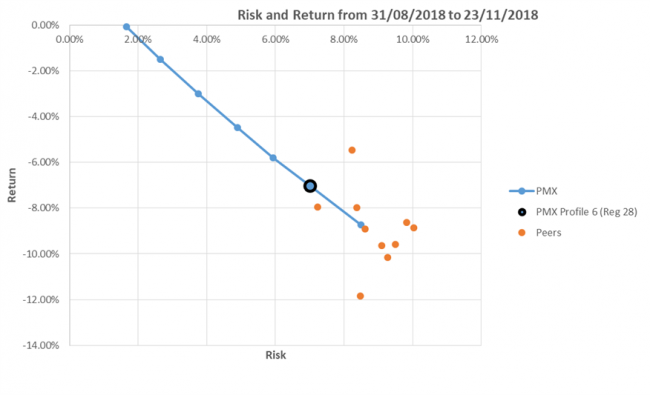 Cryptos back in the news

Just when we thought the whole brouhaha around crypto had quietened down a bit, more recent sell-offs have prompted a whole bout of new questions from investors.  Our views now and back when I wrote this article (link below) earlier this year have not changed – at that point, Bitcoin was trading at over $10 000 and is currently hovering below $4 000 with a volatility in excess of 35%.  We have no idea where it will go from here, but reiterate that it is pure speculation, not investment.  The sell-off from peak to trough is actually only the third biggest percentage-wise in Bitcoins history.

A great December break to everyone

My work year ends next Friday, and I am doing a bad job at hiding my excitement.  I hope you all have a fun-packed, relaxing and reinvigorating break.  Enjoy your family and friends and be safe!