“Highest inflation level in 30 years” headlines have made inflation the hottest topic in markets. But household and business surveys, and markets, to an extent, aren’t overly concerned by this – they expect inflation to be transitory and that Central Banks will remain in control to bring inflation back down to target within a few years.

It is worth unpicking this a little by exploring, in more detail, what central banks are thinking and doing in response to the current climate and what to be aware of as investors.

As a quick overview, the cause of recent inflation ultimately boils down to a shortage of supply relative to the high level of demand. COVID caused both production and consumption of goods & services to be restricted. Land sat fallow, labour was not able to work/worked less effectively (at least in the short-term), and capital (eg tools and equipment) were underutilised, but at the same time consumers tightened their belts in the face of a recession.

Demand then returned and exceeded normal levels (fuelled by low interest rates and generous fiscal policies in the form of unemployment/furlough support and tax relief). Supply remained constrained, however, in the form of less resources (raw materials, inventory levels, shipping availability), causing supply chain disruptions and ultimately feeding through to prices and thus inflation. The recent rise in geopolitical tensions in the Ukraine have caused oil prices to rise sharply, fuelling inflation further.

Central banks are tasked with maintaining inflation at a medium-term target. This is at odds with a commonly quoted inflation measure like CPI (Consumer Price Index), which is a backward-looking short-term figure, usually only covering a year. This mismatch can, perhaps unfairly, lead to criticism of central banks if CPI is too high/low, particularly if they are not taking action.

Although central banks monitor CPI, their emphasis remains on the medium-term outlook. Central banks focus on questions such as: How sustained are energy price increases likely to be? What are wage expectations over the next year and beyond? And to what extent will supply constraints/pressures ease in the next 12-24 months?

Broadly, medium-term (2-3 years) and longer-term (5+ years) inflation expectations remain anchored relative to historic averages, although have been rising of late (particularly in financial markets and company surveys). This does still indicate that markets, households & companies are confident in central banks’ abilities to keep inflation under control - through rate changes or letting temporary effects wash through. The evolving situation in Ukraine may have some impact on that in future survey results. 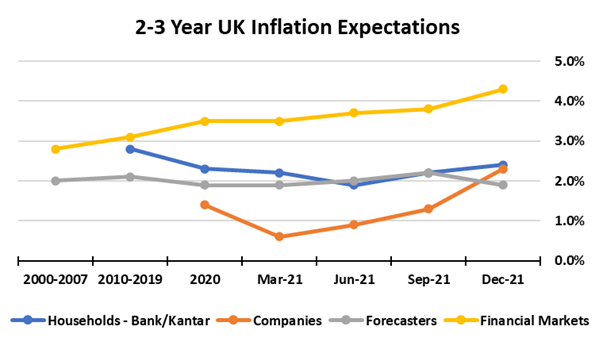 Note: Financial Markets expectations are based on RPI (which is generally higher than CPI by roughly 0.75%)

Similar to the UK, US markets also expect the Federal Reserve to keep inflation under control in the future. 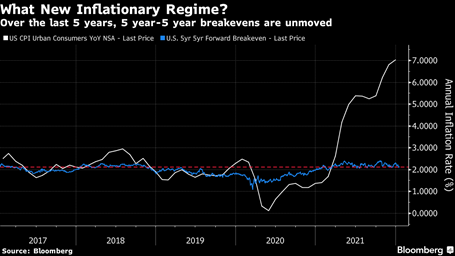 Looking at interest rate expectations, there is a clear indication that markets expect the Federal Reserve, the BoE and even the European Central Bank to raise rates in the near future and much faster than was thought only a few months ago. 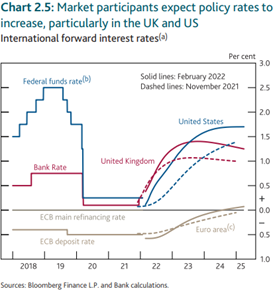 However, rate rises are not the only force expected to tame inflation. Each quarter, the BoE projects CPI 3 years into the future, with two options: unchanged interest rates and market expectation interest rates. This shows that expected interest rate rises (around 0.75-1%) are only expected to reduce inflation by 0.5% over 3 years. The vast majority of the inflation reduction comes from temporary effects dissipating as the one-year comparator rolls off. Oil price pressure may, of course, have the opposing effect on inflation and a close eye needs to be kept on how the situation in Ukraine develops from here. 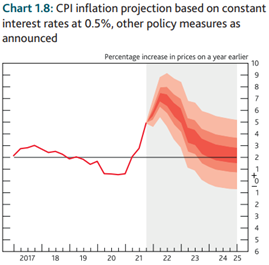 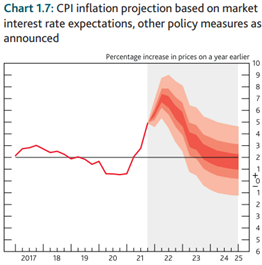 What Is Likely to Happen?

Firstly, increases in CPI do not automatically translate into interest rate hikes, even if these figures appear to remain stubbornly high. Central banks focus on medium-term inflation expectations and look-through any transient factors. This being true, can we try to interpret their next move?

In the UK, the December 2021 & February 2022 interest rate rises indicate that the Bank of England is concerned that the latest inflation shocks could persist for a little longer yet. And it shows a willingness to act now to keep inflation under control for the medium-term.

Inflation is also highly likely to increase further in the short-term, particularly given the current situation in Ukraine impacting oil prices, peaking around April 2022 (as energy price hikes come into effect). Market expectations are for up to another 1% of rate hikes in the UK during 2022, thus interest rates (which obviously feed into mortgages and savings) nearing 1.5% by the end of the year.

So, there is consensus amongst markets, businesses and households expect that Central Banks will ensure inflation falls back down towards target over the next 2-3 years. This will be delivered by modest rate rises, as well as an easing of some temporary factors like supply bottlenecks and positive geopolitical news which would tame energy prices.

What Can Investors do about Inflation?

Practically, investors can one or more of the following to deal with inflation:

This is good advice regardless, but within the context of making portfolios more robust to inflation it means ensuring you have exposure to asset classes that can resist higher prices.

If you must hold bonds, consider adding a modest amount of higher yielding bonds such as high yield and emerging market bonds.

There is some evidence that cheaper value stocks (which now include oil & gas companies – which will also benefit from the rising oil prices – and banks) handle higher inflation, and the higher rates necessary to deal with it, better than the more expensive growth stocks. So, make sure you aren’t over concentrated in growth sectors like tech (this isn’t easy given their historically high weightings in in certain indices like the S&P 500).

Add in some ‘real’ assets such as (listed) property and infrastructure. They have a degree of inflation protection built-in through the nature of their underlying cash flows.

(If you can) Invest in less bond and cash

Equities and higher risk assets have the potential to generate inflation-beating returns, even in the near term; but cash and bonds are more or less guaranteed to lead to a loss in purchasing power for holding them. Take for example a UK investor who can, if she’s lucky, get 0.5% on a bank deposit. The BoE is currently forecasting about 6% inflation over this year which would leave her 5.5% poorer on her cash deposit in real terms by 2023.

Even inflation-linked bonds aren’t as helpful as you might think – most of them are now so expensive that buying them locks in a negative real yield if you hold them to maturity.

As well as having positive expected after inflation returns, the likelihood of equities generating real returns increases if our investor can hold them for longer than just a year. Thus, for an investor that has a longer time horizon, and has both the ability and willingness to accept higher risk in her portfolio, up-risking can improve the chance her portfolio outruns inflation, particularly if she also diversifies her equity holdings (see above).

As supply chains normalise, monetary and fiscal stimuli are withdrawn, geopolitical tensions ease and people go back to spending less on goods and more on services, inflation is very likely to decrease.

It may not be as quick as we hope, but inflation should come down and when it does start doing so, a lot of investor inflation worries will decrease. Investors should definitely take steps in the meantime (see above) but a big part of the cure for inflation will be simply enduring until it passes.