Life under “social-distancing” and why it matters

These last several days have been a challenge for my children as we enforced strict social distancing, which doesn’t preclude getting out for exercise but means no direct social contact with their mates – and no clarity on how long this situation will last.  It doesn’t help that the threat feels so distant and intangible.  It’s like being in Florida when the satellite images show the storm coming, but the wind has barely ruffled the palms.  With no recorded deaths in SA yet and friends whose parents have been slower to adopt stringent protocols, it is easy to feel hard done by.

Eventually, through sharing articles with my 15-year and 12-year-old sons and patient repetitive explanations, the message has taken hold.  They understand that this is not about them and that they carry the gravest responsibility you could place on the shoulders of a young man.  Their every action is multiplied and could mean the difference between life or death for so many (a group that includes their 80-year-old grandfather and 76-year-old grandmother).  It used to be only generals and admirals who had the power to make decisions about who lives or dies, which is alien to ordinary people.

I was reminded of Churchill’s famous words post Dunkirk, as narrated by William Manchester:

‘Behind them lay the sea.

‘It was England’s greatest crisis since the Norman conquest, vaster than those precipitated by Philip II’s Spanish Armada, Louis XIV’s triumphant armies, or Napoleon’s invasion barges massed at Boulogne. This time Britain stood alone. If the Germans crossed the Channel and established uncontested beachheads, all would be lost…

‘Now the 220,000 Tommies at Dunkirk, Britain’s only hope, seemed doomed. On the Flanders beaches they stood around in angular, existential attitudes, like dim purgatorial souls awaiting disposition. There appeared to be no way to bring more than a handful of them home. The Royal Navy’s vessels were inadequate. King George VI has been told that they would be lucky to save 17,000. The House of Commons was warned to prepare for “hard and heavy tidings.” Then, from the streams and estuaries of Kent and Dover, a strange fleet appeared: trawlers and tugs, scows and fishing sloops, lifeboats and pleasure crafts, smacks and coasters; the island ferry Gracie Fields; Tom Sopwith’s America’s Cup challenger Endeavour; even the London fire brigade’s fire-float Massey Shaw—all of them manned by civilian volunteers: English fathers, sailing to rescue England’s exhausted, bleeding sons.’

Now the roles are reversed, and it is those sons and daughters who hold the precious lives of our most vulnerable in their hands – they need to be up to the task.

Churchill was magnificent in times of crisis, because he never underplayed the gravity of a situation and used apparent helplessness to inspire.  By not sugar-coating the threat, he exhorted people to give of their best – and they did.  He gave hope that was realistic and goals that were achievable and worth striving for, not false hope that deflates and sucks energy from the collective will.

And there ARE reasons to hope in this crisis and it is becoming clearer what needs to be done.  The South African government has been quick to provide progressive leadership that has been lacking in Europe.  Civil society is speaking with one voice and business has been proactive and made sacrifices at great cost; schools, colleges and universities closed before they even experienced cases; sports events and lucrative conferences have been cancelled.  By and large, SA citizens have not panicked, and cases of shops being cleared out are few (SA agricultural production is expected to up 26% this year).

That this crisis will pass cannot be doubted, but there is a long, hard road ahead.  Economies will recover along with investment portfolios.  But it is our influence on the path we take to get back there that is all-important. How does epidemic maths work?  It’s quite simple.  If every infected person passes the virus to more than one person, the epidemic grows; less than one person and it fizzles out.  That understanding should form the bedrock of behaviour and policy.

We watch the numbers every day and interrogate the data, looking for inflections that signal turning points.  We saw them in China and South Korea, where life is slowly returning to normal, and we know what strategies work.  Italy, the world’s worst afflicted country by many measures, saw corona-related deaths decrease for the first time yesterday.  Knowing what’s possible is what gives us hope but getting there passively is not an option. 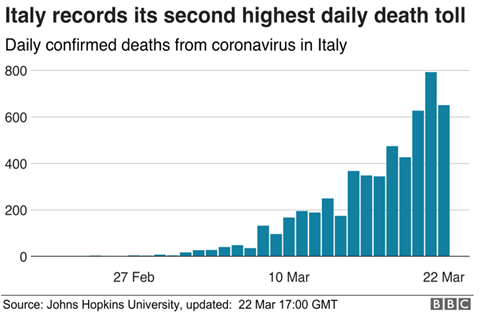 With such an absolute focus on the virus, it is critically important, more than ever, that investors remain calm and resist the impulse to change strategy in their portfolios.  Is it conceivable that portfolios could lose more from here?  The answer is yes.  However, trading out of risk assets now means crystallising losses, making them permanent at a time when uncertainty is at its greatest.  And uncertainty is a key ingredient in asset valuations.  The only way of recouping losses is to remain invested.  We have no way of knowing when this turning point will take place, but even a little less uncertainty could provide a massive boost to stock markets, long before economies recover.  In other words, it could be very easy to miss the turning point.

Nic Spicer, Head of Investments in our London office, has the following to say:

Importantly, central banks and governments are acting aggressively to mitigate the damage inflicted by the shut-down to protect the economy during this stage and to ensure it can rebound in future. Central banks have been lowering rates, restarting quantitative easing and encouraging banks to lend to businesses.

How have markets been behaving?

Equity falls have been the most visible. Year to date, developed and emerging markets have largely performed in-line with each other, although performance within each block hasn’t been that even. Within Emerging Markets, Asian equities (particularly China A-Shares) have done much better than Latin American Shares. And within Developed Markets, it’s been the UK that has really suffered. This has been particularly true of UK mid-caps as demonstrated by the FTSE 250’s almost 40% fall year to date.

Even high-quality sovereign bonds, which usually benefit from a sell-off in equities, sold off last week. It seems this has been due to a general unwinding of previous strategies as hedge funds, funds and sovereigns rush to sell whatever they can to generate hard cash.

We continue to monitor and manage portfolios carefully. We are not making any knee-jerk changes as portfolios remain fundamentally sound, but we are continuing to rebalance clients back to target risk weights where appropriate i.e. making very modest purchases of quality equity funds at these lower levels.

And although we remain very careful about the short-term, and we acknowledge that it is certainly possible for markets to fall further from here, we are not losing focus on the long-term. We do expect markets to recover eventually and we are positioned for this too”.

How are PMX portfolios holding up?

Brendan de Jongh will be sending out a note this week comparing the performance of PMX portfolios versus major indices.  The benefits of well-diversified portfolios are clear.