Fire is a critical tool in veld management. Even with healthy veld, a periodic burn helps to remove unpalatable, moribund vegetation and to stimulate new growth. Ideally, you need a cool fire for this, after the first rains and on a day that is not too hot with only a little wind. But where the veld is unhealthy, through over-grazing or unsustainable utilisation, you often get formations of thick encroaching bush and invasive woody plants that will displace palatable grasses. For this you need a hot fire, a fire with the wind behind it on a dry day. It will burn quickly with an intense heat right up to the tree tops, but with maximum temperatures well-above ground level. In the soil, where you find the grass seeds, little damage is done. These head-fires, while effective, are fast-moving and dangerous. But without them, the veld may eventually be doomed.

Our power crisis in SA seems to be the fulfilment of years of dire predictions and a smug vindication of the doomsdayers. Hence, the national distemper, depressing dinner party talk and proliferation of “for sale” signs in leafy suburbs. In reality, one did not need second sight to anticipate this – the risk was foreseeable and if you are given to panic, your distress should have peaked a long time ago. Panic (especially if it’s a super-delayed reaction) is seldom a good strategy and it also makes you feel bad.

My somewhat more upbeat mood stands in contrast to the mainstream, although I am not entirely alone. Of course, an atavistic lust for vengeance is normal and society needs hard evidence that the government will act against the makers of this mess. More importantly, as a country, we need to focus on the future and positively tackle and reverse years of brazen greed, outright criminality and mind-shattering incompetence. This is a building job, but you can’t start casting foundations until you have cleared the site of brush and weeds.

I understand the impact of this crisis on a frail economy with tepid growth and how much damage it has caused. Yes, I know the systemic importance of our power utility and the constraints it places on every sphere of South African life. I know too the risks of the additional stresses on a societal fabric that is already stretched taut and is fraying at the edges. I know that Eskom is only the most visible sign of the tendrils of corruption that extend into the entire apparatus of state. I know that the ANC’s election list depressingly confirms that there are still plenty of bad guys within the gates. I know these things and yet I am as positive as I have been in years.

Lest we forget, it was just over a year ago that the bad guys were actually running this country and still planting their weeds. Zuma was unaccountable and untouchable. So brazen and confident were his lieutenants and handlers that they barely tried to cover their tracks. Such was their conviction that their scheme was irreversible. The only insights we had were through courageous investigative journalists – now we are getting it live via the Zondo Commission. These public revelations are deliberately designed to force the hand of the executive. There is no choice now and prosecutions will follow. This project has real, unstoppable, public momentum – the genie is out of the bottle.

To me it’s like that release of tension when the starter’s gun goes off, or when the referee blows his whistle and the game begins, when the invigilator tells you to pick up your pen and turn your exam paper over. All the anxiety, pre-match nerves, self-doubt and what-ifs evaporate. There is no time left for prevarication or backsliding – it’s time to get going. In South Africa it was always going to be the case that situation would need to be unambiguously dire before the call to action became unanimous. In a divided ANC, the entrenched barriers to doing the right thing are daunting – so much easier when there is no choice. Eskom’s failure represents a disabling strike on the bad guys. It is also the most powerful enabler for those who are going to fix it.

This reasoning can be extended. Only when your national debt reaches the limits of sustainability and revenue collection is anaemic is it possible to say no to the populists and then make sensible decisions. No choice. When the alternative is bankruptcy and closing a mine, management will stand firm on unaffordable wage demands. No choice. Brinkmanship has been too successful a strategy for too long. The sooner SAA hits the skids properly and government has no choice but to find a buyer, the better for this country, inconvenience notwithstanding. You need a hot fire.

Cyril Ramaphosa does not need to pour a can of petrol over the ANC – it’s unnecessarily risky. It would involve playing on your opponent’s terms – the ANC’s internal processes lend themselves to the kind of strategies that made state capture possible in the first place. Rather do it painstakingly and make sure it’s above reproach. Restore and enable the NPA, make sure that the dedicated prosecution units are free from interference, protect the courts and free press. The fire will burn hot enough in due course. 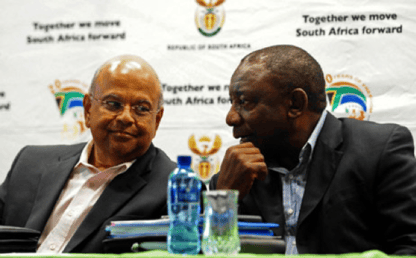 So, perversely, I found myself smiling as I looked out over a dark Johannesburg from Higher Ground restaurant last week; light pollution is my pet hate and I watched a brilliant moon rise in a pitch-black sky. The smell of paraffin lamps at home reminded me of the bush and I loved having conversations with my children without the TV and the internet. It was satisfying going to a restaurant with no generator and just watching Joburgers shift gear and get on with it. Cheers when the lights came on and groans when they went off again almost immediately. It’s what we do. This load-shedding is not going to last for ever, but it is an important catalyst to getting to where we need to be and may prove to be a critical point of inflection.

I am by nature neither a pessimist nor an optimist – I just try to see rationally through noise. I reserve a special dislike for the perennial naysayers in the financial services sector, not because we should sugar-coat reality, but because there is a huge difference between quality analysis and peddling every piece of rubbish on social media that confirms your views. These people are not objective commentators but are a central part of the malaise. English would be a second language in Britain if Churchill had spent his waking hours obsessing over the reasons why the seemingly impossible could not be done. Mandela told us, “it seems impossible until it is done”.

South Africans are proud of their heritage. My boys are eighth generation Zietsmans. They are decedents of a Prussian soldier by the name of Sieszmann who arrived in the Cape in 1771. The current phonetic spelling was adopted almost immediately and is uniquely South African. If it doesn’t belong anywhere else, it is a South African name. I am at home in the bush, in the ‘berg and in the surf on the North Coast. I have travelled extensively and there is nowhere in the world I’d rather call home, notwithstanding the Herculean task of rebuilding that lies ahead. But what a privilege and source of pride if we can be part of it.